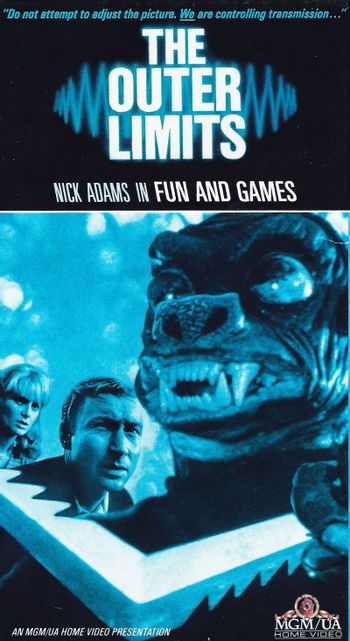 The cover for the VHS release, showing Laura, Mike and the male Calco alien together.
The Control Voice: There was a moment in time when those who were brilliant and powerful also were playful, and when they took recess from their exhausting and magnificent strides toward glory, they replenished their darker passions with fun and games. On the planet Earth, such games have been civilized, and drained of all but their last few drops of blood...

Mike Benson (Nick Adams), a former boxer reduced to a petty crook, attends a poker game that goes badly when one of the players tries to cheat and is gunned down by another player. Everyone scatters as the police arrive to investigate, and Mike tries to take shelter in the apartment of divorcee Laura Hanley (Nancy Malone). Suddenly, they are teleported into a strange chamber. An alien Senator (played by Theo Marcuse, voiced by Robert Johnson) explains that they are on the planet Andera. To entertain the masses, they will be forced to fight to the death against a male and female of the primitive Calco race, who have also been abducted from their home planet. The losers will have their home planet destroyed in a process that will take five years, and trying to refuse means their planet will be destroyed anyway.

The jaded Mike says he doesn't care about saving the Earth nor dying and refuses to fight, despite Laura's pleas. The Senator decides to give him one day to decide and teleports the humans back to Earth. Laura tries to convince him to fight, but he says that back when he was a boxer, he was almost killed in the ring and no longer feels his life has value. However, a policeman approaches him and reveals the other poker players accused him of killing that man. Realizing he doesn't want to rot for five years in prison and then die, Mike gives in and calls out that he will fight. He and Laura are immediately teleported back to Andera.

The two teams are teleported to a jungle environment, and Mike and Laura quickly realize the match is unfair. Both teams are provided with a three-day supply of food per person, but Mike's gun is disabled and the humans are provided no alternative weapons, while the Calco aliens are armed with bladed boomerangs, plus they resemble apes and are naturally stronger and tougher than humans. After a brief run-in, the two teams play a cat-and-mouse game, and Mike and Laura slowly start to bond.

The male Calco kills the female to take her food supply, and is now confident that he can outlast the humans or force them to come to him. Upon learning this, Laura offers to sacrifice herself so Mike can have her food, but he cannot bring himself to kill her. Laura runs off and finds the Calco, offering him a clean shot at her. However, the Senator freezes the Calco in place, saying that her sacrificing herself would be anti-climactic and not entertaining. He mocks and riles her up by reading her memories about her failed relationship with her ex-husband, then releases the Calco.

Mike finds them, and a scuffle ends up with Mike dangling from a log bridge over a pool of boiling water. The Calco starts stomping on his hands trying to force him to fall, but Laura picks up his discarded boomerang and throws it, nailing the Calco in the head and killing him. A few seconds later, Mike loses his grip and falls.

Laura is teleported back to the chamber and mourns Mike, but the Senator reveals that since Laura was able to kill the Calco before Mike fell, Mike was teleported away and is safe and sound. The Senator tells them that the police will realize that Mike is innocent of the murder charge and release him, then returns them to Earth. Unfortunately, their memories of their experience have been erased, though Laura seems to have a flash of recognition as Mike walks away.

This episode has no closing Control Voice narration.