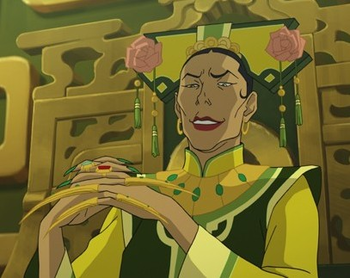 The more impractical, the eviler.
Sanageyama: Lady Satsuki's sharpening the fangs of the rebellion.
Inumuta: Nails, to be accurate.
— Kill la Kill, "Far from the Madding Crowd"
Advertisement:

A fashionable bit of personal accessorizing are Femme Fatalons. Often filed to a painful point and extending well past the end of the fingertip, these nails mark the woman wearing them as, at the very least, untrustworthy, and often as dangerous or predatory.

It's uncanny how often women with Femme Fatalons turn out to be villainesses too. While Power Hair at least has the benefit of the doubt (mostly because most people have hair), it's a rare woman who can wear these and be on the side of good. Maybe it's the claw-like look, the illusion of Creepy Long Fingers, the implied sadism and Finger Licking Evil, or perhaps just having them is itself a Red Right Hand (well, red fingernail polish). They also imply that the wearers consider themselves above manual labor, overlapping with Aristocrats Are Evil and Idle Rich, or they're vain, since a lot of effort goes into maintenance. In works aimed at children, a woman wearing stiletto nails is always a Child Hater.

Non-natural long nails, like acrylic or gel extension or glue-ons and primarily decorative nail guards or nail sheaths (like these

◊) also count as Femme Fatalons, as long as they're used as a hint that the wearer is dangerous or villainous.

Despite the name, Femme Fatalons are not only worn by women, either. The occasional male villain will opt for them as well.

Not to be confused with Femme Fatale. Compare Finger-Lickin' Evil or actual claws. Often found along with Fangs Are Evil. May be paired with I Broke a Nail.