Film / Never Too Young to Die 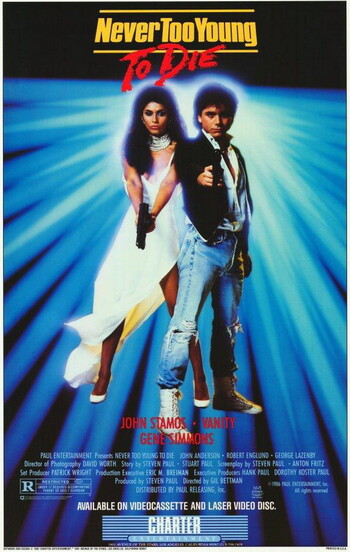 Uncle Jesse and Vanity are about to shoot you!
Never To Young To Die is a low budget action/spy movie released in 1986. It deals with the evil hermaphrodite Velvet Von Ragnar (played by Gene Simmons) who has rules a gang of Mad Max esque modern day barbarians and seeks to poison the water supply in Southern California with radioactive waste and make it undrinkable for 10000 years. His main enemy is the Secret Agent Drew Stargrove (George Lazenby), who has hold of the Ram-K (a disk he needs to execute his plan). When the two meet up early on, Ragnar kills Stargrove once he finds out he doesn't have the Ram-K. As such, his son Lance Stargrove (John Stamos) has to team up with Danja played by the singer Vanity to stop him.
Advertisement:

The movie was fairly obscure for some time, but gained some more recognition after The Agony Booth and Something Awful reviewed it. It wasn't until 2017 that the company Shout!factory gave it a proper DVD and Blu-ray release.

Never Too Young To Die contains examples of: