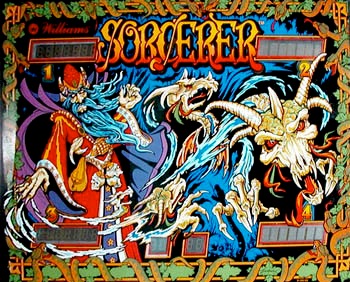 "Feel my power!"
"I am the master, you are nothing."
Advertisement:

Sorcerer is a 1985 Pinball game designed by Mark Ritchie and released by Williams Electronics. With the Sorcerer's flashing eyes and numerous taunts, it became the second-best-selling pinball game of the year, and is fondly remembered for its straightforward but challenging gameplay, fast action, and ornate art by Pam Erickson.

The table itself is the named Sorcerer, who is being challenged in a magic duel by the player. Invoke his title to build your magic power, then use it to summon demons, earn extra balls and light the special. But move quickly with the upper flipper, or else the magic will dissipate and leave you powerless. For more points, lock two balls to start multiball, then repeatedly shoot the ramp to build the multiball multiplier up to 5x.

A digital version of this pinball is available in Pinball Hall of Fame: The Williams Collection and formerly The Pinball Arcade. The latter game no longer offers it due to the developers, FarSight Studios, no longer having the licenses to all Bally and Williams tables as of July 2018.