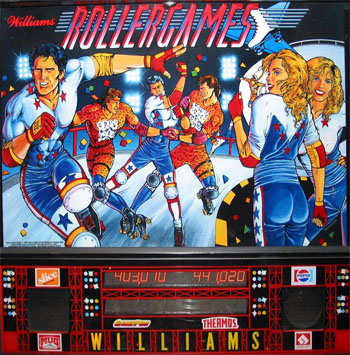 As Seen On TV!
"GO FOR THE WALL!"
— Male announcer
Advertisement:

Rollergames is a 1990 pinball game designed by Steve Ritchie, with artwork by Pat McMahon and released by Williams Electronics. It is based on the short-lived roller derby 'sports entertainment' television show of the same name from 1989.

Its most notable features include the Deep Freeze Magna-Flip, which, when lit, magnetically freezes the ball next to the upper right flipper, for an easy shot to the Wall ramp, and the multiball launching loop, which, during normal gameplay, kick the balls out of (and back into) the lock at random times.