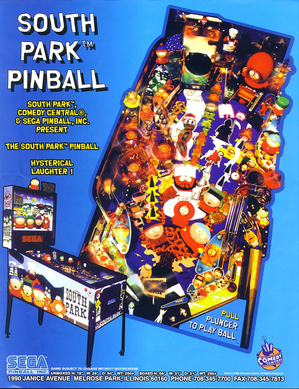 South Park is an arcade pinball game produced by Sega Pinball in 1999. It proved to be the last pinball game released by Sega before the pinball division was sold to Gary Stern and reformed as Stern Pinball.

The consensus among pinball players is that South Park is an easy and unbalanced game whose primary appeal is the license. Unfortunately, that also worked against the game in many locations — even with the objectionable elements toned down, many family-friendly establishments refused to carry the game (or drew the ire of angry parents when they did), while patrons at adult-oriented venues were hesitant to play a game based on a cartoon. As a result, fans of the game often use the terms "overlooked" and "underrated" to describe it.