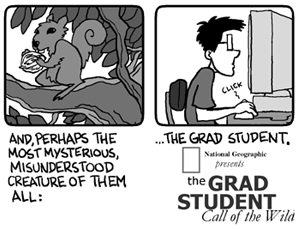 Adam Savage: We've caught sight of a nocturnal Hyneman foraging. He seems to be gathering sticks, it's unknown for what because so little is understood about this elusive animal.
Jamie Hyneman: Is he doing his David Attenborough thing again?
— MythBusters
Advertisement:

This is the rare wild Wildlife Commentary Spoof, in its natural habitat. What a fantastic opportunity to observe its natural behavior! Let's follow over its shoulder, camouflaged by our Adventurer Outfits in khaki — they'll blend in not only against the elephant and black-rhino tusks we're poaching but also against Steve Irwin. Be careful to speak in the same volume level as golf commentary, so as not to disturb the "creature" being observed.

Let us further describe this species:

A Dead Horse Trope variation would have an elderly man commenting, "While Jim is wrestling the giant alligator [or some other deadly place we've just left Jim], I'd like to take a moment to talk to you about life insurance." This was based on the Mutual of Omaha's Wild Kingdom series, popular in the 1960s and 1970s. (Marlin Perkins got too old to go out into the field and began doing commentary - and commercial breaks - from the studio, hence the comedy.)

A big component of what makes this amusing is that most characters who use this act like Large Ham Announcers. Compare Mockumentary. Mock Cousteau is a sub-trope.

In "Jacques Cousteau vs. Steve Irwin," Irwin comments on Cousteau as if he was a wild animal on one of Irwin's wildlife TV shows.

In "Jacques Cousteau vs. Steve Irwin," Irwin comments on Cousteau as if he was a wild animal on one of Irwin's wildlife TV shows.