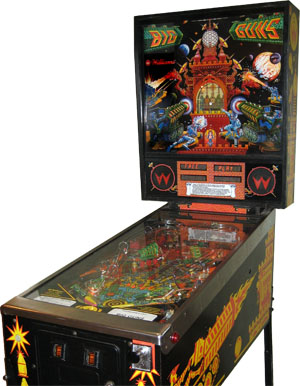 "Feel the Power!"
"Attack the castle! Commence firing! Fire at will!"
— Commander
Advertisement:

Big Guns is a 1987 pinball game designed by Mark Ritchie and Python Anghelo and released by Williams Electronics.

Taking place in a medieval future, the King Tyrant is holding the Queen hostage. It's up to the Queen's military forces to storm the King Tyrant's castle and rescue the Queen. But to successfully storm the castle, they would have to be granted invincibility powers.

Big Guns's notable features include two catapults (the cannons) that shoot the ball into the air and into the habitrail, and a taller-than-normal backbox, which houses a bagatelle mini-game (the King's Chamber).