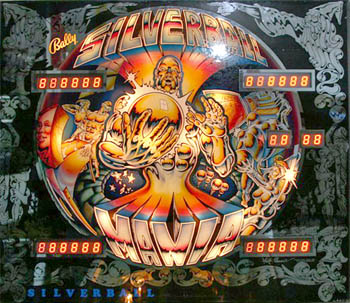 In the beginning, it was just pinball...
Advertisement:

Silverball Mania is a Physical Pinball Table designed by Jim Patla and illustrated by Kevin O'Connor. It was released in 1980 by Bally.

In the annals of pinball, Silverball Mania stands out for its mesmerizing art; the mirrored backglass is a stunning combination of black and silver, an eye-catching attraction in any sort of light. The playfield itself depicts an abstract mercurial landscape of chrome, where muscular men and lithe women spring forth from a gigantic silver ball under the watchful tutelage of a silver wizard. Among all this activity, the player's goal is to hit the various targets and spell SILVERBALL MANIA; loop the central horseshoe to raise the Disappearing Kicker, then let it kick drained balls back onto the table and try for the Carry-Over Special.

The game was originally an unthemed "whitewood" from Jim Patla. The imagery came to O'Connor from an idea in a Comic Book about an artist who drew everything in chrome. While Silverball Mania is not a particularly difficult game, it's definitely a memorable one.