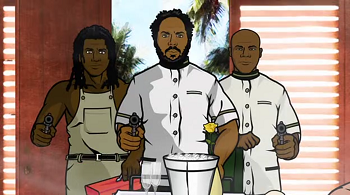 A classic ploy of Heroes and Villains alike for gaining access to their target who is staying at a hotel is to pose as room service personnel. Can turn into a gag if the subject becomes suspicious because they didn't order room service, especially if they are staying at a low-end establishment that clearly doesn't offer room service in the first place.

A more sensible ploy could be to pretend to be housekeeping staff. Other kinds of services may also be impersonated, such as escort services, depending on where they're staying and other circumstances.

Outside of a hotel setting, this type of ruse is a form of Delivery Guy Infiltration.