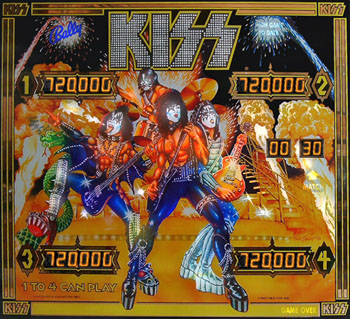 KISS is an arcade pinball game based on the attention-grabbing rock band. It was designed by Jim Patla with artwork by Kevin O'Connor, and released in 1979 by Bally.

As is typical for pinball games of the era, there is no narrative, and the goal is to simply score points while rocking out all nite with the masked marvels. The word K-I-S-S is repeated four times in the center of the playfield; the player scores points by hitting targets and rollovers to light the letters, with additional points for completing an entire column or row. While Gene, Paul, Peter, and Ace play on from the strobing backglass, try to shoot for the center rollover to spot an entire row, or hit the A-B-C-D targets for double scoring, an extra ball, or a special.

Not surprisingly, the KISS pinball rode the band's popularity to sell 17,000 units, become Bally's best-selling table of 1979 and one of pinball's top ten tables ever. The game was heavily promoted by the band, with appearances on television, comic books, and music magazines, as well as the Dynasty tourbook, while posters of the backglass art were sold to the public. Pinball buffs consider it a decent table, but one that's more memorable for its license than its gameplay. Even so, it remains in high demand with KISS fans and music collectors; notable owners include musicians Trent Reznor and Marc DeLeon.

In 2015, a new KISS pinball table was released by Stern, as a Spiritual Successor to this game.