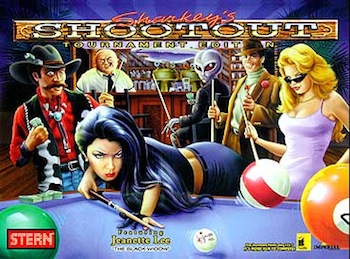 The only thing more boisterous than the game is its creation.
Advertisement:

Sharkey's Shootout is a Physical Pinball Table released by Stern Pinball in 2000. Designed by John Borg with art by veteran pinball artist John Youssi, this is a game with an unconventionally tumultuous origin.

Sharkey's is about an exclusive, invitation-only pool tournament in Sharkey's Pool Hall, where a motley cast of characters — including Sharkey himself, Tex the cowboy, and a space alien — attempt to dethrone the current champion, Real Life pool expert Jeanette "The Black Widow" Lee. The player must first defeat five other players at 8-ball or 9-ball, then take on The Black Widow herself to win the generous cash prize. And the challenge extends beyond the playfield, as Sharkey's is Stern's first tournament pinball, allowing players worldwide to compete with each other.

This game got its start as Golden Cue, note Full title: Kelly Packard's Golden Cue a Spiritual Successor to Bally's Eight Ball Deluxe. It was developed at Sega Pinball by Jon Norris, who intended it to be a "goal oriented" game that ended after a set of objectives were met, giving beginners opportunities to catch up to expert players. Outside of a handful of test machines, however, Golden Cue was never finished, as Sega Pinball closed its doors and was reformed into Stern Pinball. During the transition, Jon Norris was ousted due to conflicts with management, and John Borg was tasked with re-engineering Golden Cue's unorthodox game design into a more conventional pinball table.

Perhaps as a reflection of its turbulent origins, players' opinions of Sharkey's Shootout tend to be divided between those who enjoy its blend of old-school gameplay and modern sensibilities, and those who dislike its white backbox, poor sound quality, and conflicting mix of rules and game elements.