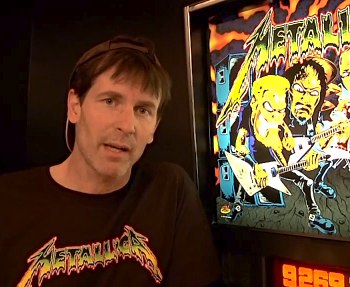 John Borg and one of his favorite pins.
Advertisement:

John Borg is a pinball engineer and designer who has been working in the industry for over twenty years. He has developed numerous high-profile pins for Data East, Sega Pinball, and Stern Pinball, including Jurassic Park, Tales from the Crypt, Guns N' Roses, Indiana Jones, Iron Man, TRON: Legacy, Metallica, and X-Men.

Borg started off intending to design injection molds for producing plastic parts. While looking for a position, he met the folks at Premier Technology (Gottlieb); upon noticing that Premier was a pinball company, he became interested in the industry, and was hired in 1987 as a mechanical engineer and draftsman. He got his start working with John Trudeau on Victory and Jon Norris on Diamond Lady. In 1989, he received his first patent for a a rotating mini-playfield that appeared in Gottlieb's Lights... Camera... Action!.

Borg later moved to Data East in 1990 as a game designer, and in 1992 released his first game, Star Wars. He then continued a decade of hits for Data East, Sega, and Stern, ending in 2001. John later returned to the field in 2007 with Indiana Jones (Stern).

Today, John Borg serves as the head of Stern Pinball's design division, and continues to design and oversee the company's games. He is an avid fan of BMX racing and heavy metal music.