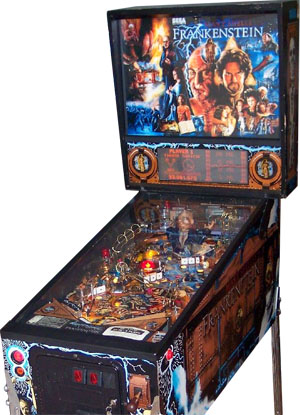 Mary Shelley's Frankenstein is a Physical Pinball Table designed by John Borg and illustrated by Paul Faris. Based on the Tri-Star film directed by Kenneth Branagh, it was released in January 1995 as the debut pin from Sega Pinball.

As expected, the game revisits key scenes from Victor Frankenstein's experiments to reverse death. Travel to Ingolstadt, collect body parts from the Graveyard, then raise the Voltage to reanimate The Creature. Lynch Justine, start Geneva Multiball, and endure the Stoning, and try to pick up an Extra Ball or Frankenstein Millions along the way. Players who can get to the Ice Cave in the North Pole might be able to complete the Creation and discover the game's final secrets — but watch out when the Creature begins throwing pinballs at you...

Among pinball players, Frankenstein is considered a difficult but impressive first table from Sega, with a feel that sets it apart from other manufacturers' games. Although the rules aren't too complex, the placement of targets and lanes require very precise shooting skills, and completing some scenes becomes very hard as a result. The audio/visual package also gets lots of praise, from the great use of animation on the oversized LED screen, Paul Faris' detailed artwork, and having both the movie soundtrack and Edgar Winter's "Frankenstein" as theme songs. If there is a downside, it's that the Creature on the playfield is underutilized, but the game is strong enough in other areas that it becomes moot.

Frankenstein: "Electricity is the key!"