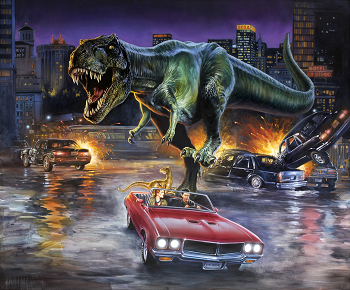 The Lost World: Jurassic Park is a 1997 pinball machine by John Borg and Sega Pinball, being a sequel to Data East's Jurassic Park and themed after the movie of the same name. It has the player going through five modes, each recreating a scene from the movie, before reaching the Wizard Mode: San Diego, where the T-Rex rampages and any major shot scores an increasing value, and any target increases the value.

One of its main gimmicks is the large T-Rex egg that breaks steadily, ultimately revealing the baby T-Rex inside. It also had an optional topper replicating the film's logo, and a curvy 3D backglass.