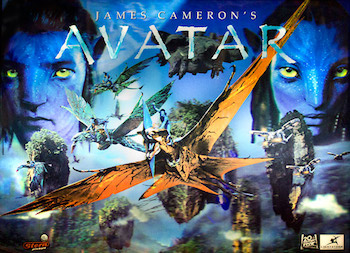 Avatar (full title: James Cameron's Avatar) is a pinball machine based on the popular 2009 Science Fiction film by James Cameron. It was designed by John Borg and Lonnie D. Ropp, with artwork by Kevin O'Connor, and released by Stern Pinball in 2010.

As one would expect, the game follows the highlights of the movie, recreating Jake Sully's encounters with the natives of Pandora and their resistance against the Unobtainium mining plans of Colonel Quaritch and the RDA. As Jake, the player will ride a giant Banshee, befriend the Na'vi, collect the seeds from the Tree of Souls, and play with the helicoradian plants. Receive gifts from Eywa, battle the Valkyrie bomber, topple Quaritch's AMP suit, then lead the Na'vi in the Final Battle for the fate of the planet.

Avatar was released at a time when Stern Pinball was moving towards simpler games to reduce costs, and a first glance at the sparse playfield leads many people to think it's a pushover. In reality, like Pandora itself, this is an unforgiving and brutally difficult title, one that requires precise aim and well-honed shooting skills to prevail. While the rules are not too deep, they still require mastery of the entire table, and the blazing speed means careless players can lose their ball in an eyeblink. Players tend to be divided as a result, between those who relish its Nintendo Hard challenge and those who wanted a more forgiving game with broader appeal.

The game includes a 3D backbox translite and custom voice clips from Stephen Lang (Col. Quaritch). In addition to the standard game, a Premium Limited Edition of Avatar was also available, with a motorized marching AMP, a shaker motor, additional playfield models, and a lighter ceramic Powerball that increases scoring when in play.

Quaritch: "I didn't think you had it in you!"