The Computer Shall Taunt You 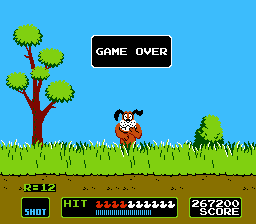 Imagine you're playing a video game. You're not really emotionally invested in it, you just want to beat the game and...HEY! Did that NPC just insult you?! What a jerk! Now It's Personal, and you will not rest until you shut this guy's mouth.

NPCs might taunt, mock, or insult you for a variety of reasons. One reason could be to make a villain seem less likeable to you and more like somebody you just want to punch. Or, if you're playing as a villain, you might go after the good guys with renewed zeal if they piss you off enough by showing their contempt for you. Or maybe you're playing a Fighting Game where everybody gloats after winning.

Sometimes, if the enemy is mocking you, they may leave themselves open for you to attack them.

Can be related to Player Punch and Have a Nice Death, depending on the circumstances. Made more frustrating if the computer is also a cheating bastard. Compare with I Shall Taunt You, Easy-Mode Mockery and Game-Over Man, where the character may or may not mock you for losing.