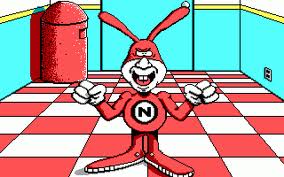 Hi hi hihihi hihihi
Avoid the Noid is a Platform Game for the Commodore 64 and IMC PC, created to advertise Domino's Pizza. You start at the bottom of a 30-story building, and have to deliver a pizza at the top within half an hour. The building is infested with noids, who will use jump kicks, exploding telephones, water balloons and bazookas to destroy your pizza.