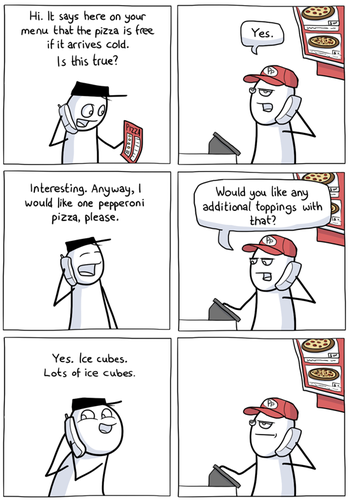 A pizza is ordered. If it fails to arrive within a certain time frame, it's free! This was an advertising gimmick invented by Domino's Pizza in the 1980s, but was largely discontinued in the early 1990s because of an increase in the number of delivery drivers getting into car accidents or being pulled over for speeding and reckless driving, and also probable profit losses due to customers taking advantage over the "or it's free" part. More than two decades later, this trope has mostly fallen out of use in fiction made after the mid-1990s or so. And if a pizza place still displays such a policy nowadays, it will usually be constrained to a given area.

Can be done from the perspective of the irate customer or the put-upon delivery guy — who may well have his job dependent on getting there in time. Comedic versions may have the customer attempt to stop the delivery person from getting on time to receive free pizza, or order pizza from some outrageous location in the middle of nowhere, such as the middle of the jungle, Antarctica, or the moon. Most often, the pizza still gets there on time (or two minutes late).

Carrot orders a pizza with very weird toppings, and is told that the joint will refund his 'earth money' if it isn't delivered in 30 minutes.

Carrot orders a pizza with very weird toppings, and is told that the joint will refund his 'earth money' if it isn't delivered in 30 minutes.