Literature / ATL: Stories from the Retrofuture 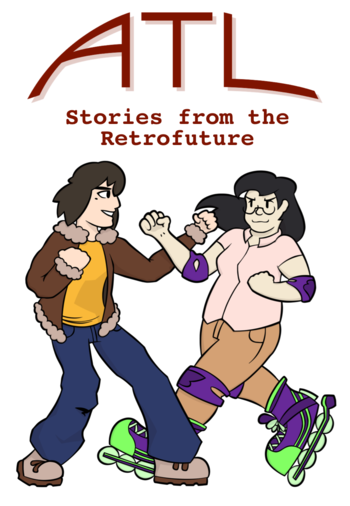 ATL: Stories from the Retrofuture

is a Web Serial Novel by Thedude3445. It's all about Morgan Harding, a twentysomething, superpowered slacker who secretly saves the city of Atlanta from technological disaster with the help of a robot ally and a clumsy best friend.

Set in the future imagined by the 80s and 90s, it's a Science Fiction/Cyberpunk/Comedy/Drama/Action/Detective Drama/Slice of Life... Okay, it's a bit of a mix of genres.

The story updates three times a week, and is divided into various novella or novel-sized stories, each of them covering a different subject in the wild world of retrofuture Atlanta.

Karina charges towards another guy, gets ready to do another sweep, and then she realizes there’s gun pointed right at her face. “HOLY SHIT!” she yelps.