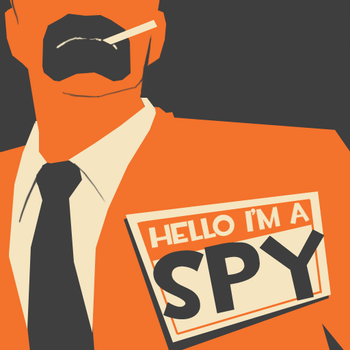 FYI...
Malory: Most secret agents don't tell every harlot from here to Hanoi that they are secret agents!
Archer: ...Then why be one?
— Archer
Advertisement:

"The name is Bond. James Bond."

Is that so, Mr Bond? You don't think that since your job is a secret agent that perhaps you shouldn't tell everyone your real name!?

Maybe that's why every supervillain you encounter already knows who you are, knows your name, your "secret" code number, what you look like, and how you like your martinis.

Hollywood secret agents seem to have a habit of being remarkably unsecretive, whether it's by using their real names, lack of disguises, waving their weapons and performing stunts in public while dressed in a tuxedo, or merely looking like Arnold Schwarzenegger. Compare Highly Visible Ninja and Paper-Thin Disguise. See also The Men in Black, who are also meant to be some kind of covert operatives, but are just as conspicuous. May overlap with Sigil Spam, if the organisation that plasters its logo on everything is meant to be secret.

As a matter of fact, this is often Truth in Television- Real Life spies will deny or cover up the fact that they are spies, but otherwise they will try to keep their cover-story as near to the truth as possible (as permitted by the circumstances). This is for the very simple reason that it's far easier to get caught out in a lie if you are lying all the time, whereas you are more likely to be trusted (and thus do your job better) if a suspicious opponent digs into your backstory and finds that it's everything you said it was. Naturally, this also helps to avert You Just Told Me and related slip-ups that might get you caught out. In addition, spies really do introduce themselves as their real names as James Bond does, because having a fake name is a good way to get caught.

An obsolete version of this is the supposedly-inconspicuous trenchcoat, fedora and shades, or the slightly less outdated black suit, tie, and shades, both of which most modern audiences would describe straight away as "a spy outfit".

Rumdar quickly proves himself to be a spy rather than a refugee, taking pictures of the Cerritos and asking to see critical areas of the ship.

Alternative Title(s): Overt Agent, FYII Am A Spy

Rumdar quickly proves himself to be a spy rather than a refugee, taking pictures of the Cerritos and asking to see critical areas of the ship.