Comic Book / Agent of the Empire 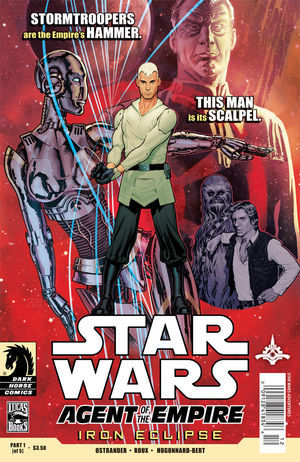 Agent of the Empire is a Star Wars Legends comic book series from Dark Horse Comics written by John Ostrander. Set between 3 BBY and 0 BBY, the miniseries will follow the Imperial Intelligence agent Jahan Cross and his droid IN-GA 44 whose undercover assignments for the Empire take them across the galaxy to exotic locales, filled with danger and intrigue.

The first series, Iron Eclipse has him deal with the architect of the Stark-Hyperspace War, and his long overdue karmic payback. A sequel series, Hard Target, takes place on Alderaan and deals with Jahan Cross following up on the legacy of Count Dooku's noble house as well as corruption in the Imperial government.

This comic series contains the following: