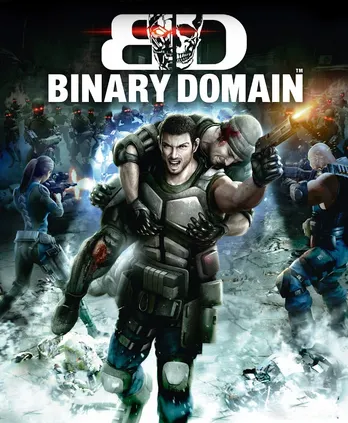 "If it's indistinguishable from humans, where does the machine end and life begin?"
— American President during a meeting with National Security Council in New Washington D.C., USA.
Advertisement:

Binary Domain is a squad-based third-person shooter for the PlayStation 3, Xbox 360, and PC. It is the brain child of Toshihiro Nagoshi, also known as the creator of the love letter to violence and gangster drama (and Spiritual Successor to Shenmue) that is the Yakuza series. It was developed under the newly-formed Ryu Ga Gotoku Studio, and published by Sega.

The story takes place in the 2080s. In an era of advanced technology, robots are commonplace, so much so that a New Geneva Convention was signed regulating their creation and establishing limitations on the direction research and development towards their creation can take. However, after an incident involving a middle-aged man going berserk in a public area, it was discovered that a new type of robot had been released into society: "Hollow Children", androids that look like humans, act like humans, and most importantly, believe themselves to be human. Unfortunately, when they discover their true nature, they grow unstable and violent. Investigation throws suspicion on Yoji Amada, a reclusive genius in robotics and artificial intelligence, and founder of the Amada Corporation, Japan's leading manufacturer of robots. As this is a clear violation of the New Geneva Convention, the nations of the world send the "Rust Crew", an internationally sanctioned strike team specially trained to deal with artificial beings, to infiltrate Tokyo (which is now an isolationist state), arrest Amada at any cost and put an end to the machines' uprising.

The gameplay is based around tactically directing your squad to overcome all obstacles that come your way. To this end the game sports what it calls the "Consequence System", in which anything you do and say to your squadmates will affect how much they trust you. On low levels of trust, they will act like a Commander Contrarian and just do whatever they want, but on high levels they will respond to your commands quickly and precisely, and grant you hints about enemy weakspots, hidden items, etc. The Consequence System will also affect the plot, as different squadmates will act differently during certain points of the story depending on their respective levels of trust. Commands can be issued either by pressing buttons or by using a headset.

The game is also a love letter to classic, old school Cyberpunk, with pretty much every trope out of the cyberpunk writer's manual on display, and loads of shout-outs/homages to classic cyberpunk works. Just the amount of tropes related to robots is staggering.

Binary Domain was released in 2012 on February 16, 23, 24, and 28 to Japan, Australia, Europe, and America, respectively. A PC port was released over Steam on April 27 worldwide.

Daisuke Sato, one of the producers involved, mentioned in a July 2018 interview with Gameblog.fr that he's interested in a sequel, but it would be up to Sega if it's worth investing in.

Not to be confused with the August Soft Visual Novel Binary Pot.

THE MACHINE AGE HAS BEGUN