In the Future, We Still Have Roombas 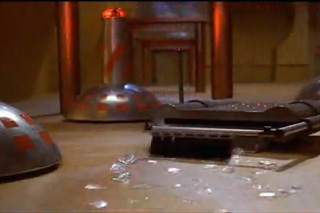 Either a Do-Anything Robot is harder for Zorg to design than a Swiss Army Gun, or he just loves the sight of a Million Mook March.
And what a surprise! Look who's scraping up the filth! Is it a human child? I wish!
— Bender, Futurama, "Fear of a Bot Planet"
Advertisement:

"Robot" once meant "worker" or "serf."note Derived from the Czech word "Robota," meaning "work." Pronounced, "Ro-BO-ta" (rather than "RO-bot-a"). In modern use, the term describes any mechanism or even a disembodied computer program capable of performing tasks autonomously with little to no human intervention. In science fiction, however, it's used for any person-like machine, even when they no longer serve a dedicated purpose, such as in the event of a Robot Uprising. So it can be a bit surprising when an otherwise futuristic robot's primary purpose is something mundane, like cleaning or assembling automobiles, even though that's exactly what they do in Real Life.

Named for the Roomba automated vacuum cleaner, probably the closest thing in modern everyday use to the Robot Maids science fiction has been promising us for decades.

This kind of robot can help to set the work in hard science fiction. It's likely to be found in Mundane Dogmatic stories.

Alternative Title(s): In The Future We Will Still Have Roombas