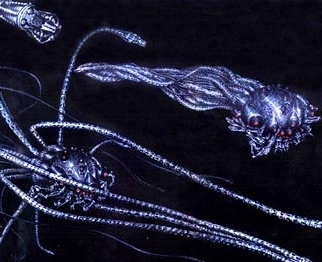 For most of the history of fiction dealing with robots, the mechanical beings have almost always been portrayed as humans or animals made up of artificial parts, usually metal. In fact, the word "android" (literally "manlike"), referring to artificial humans, predates the word "robot" by several decades, which goes to show that when people think of automatons, they tend to think of beings more or less akin to organic beings.

Gradually, however, savvy thinkers began to realize that this didn't necessarily have to be the case. After all, if you can construct robots in any form you want, why limit yourself to copying existing entities? Why not give robots unique forms of their own? Thus, the Starfish Robot started taking hold.

Such strange robots may be partly designed after equally strange organic creatures such as insects, cephalopods, or other invertebrates, though a direct parallel may be hard to find. Other times, their designs may not have any basis in the natural world. Occasionally, the robots may need to be designed with bizarre forms in order to function better in particular situations.

This trope is to Starfish Aliens what Ridiculously Human Robots are to Human Aliens. Also, note that Starfish Aliens would logically make their robots look like starfish, for the same reasons humans would make androids.