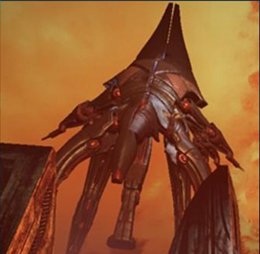 Your guess is as good as ours.
Creatures which may or may not be robotic, or organic, or some mixture. They usually appear to have artificial mechanisms behind their creation, or perhaps they have what appear to be robotic parts connected to (or growing from) their bodies. Then again, they may have fur, or be salivating or perhaps move in a fashion too animalistic to be considered robotic. In extreme examples they might be composed of inorganic materials deliberately mimicking the form and function of biological organs, leading to artificial muscles and blood. In short, the viewer will wonder "Cyborg, or machine with organic parts?"
Advertisement:

The ambiguity between machine and creature is never resolved. Most of the time, it is never even mentioned. This is often deliberately designed to invoke the Uncanny Valley principle.

Disclaimer: in order for this trope to properly apply, there has to be genuine and unresolved ambiguity either visually or philosophically. An obviously cyborg character being accused of being more machine than man doesn't really count.

May be related to Mechanical Lifeforms and Robeasts. See also Starfish Robots.