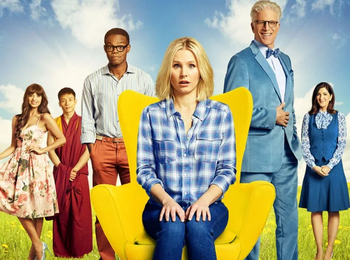 Everything is fine.Note From left to right: Tahani Al-Jamil, Jianyu Li/Jason Mendoza, Chidi Anagonye, Eleanor Shellstrop, Michael, and Janet.
"Why do bad things always happen to mediocre people who are lying about their identity?"
— Eleanor Shellstrop
Advertisement:

The Good Place is a 2016-2020 NBC Philosophical Fantastic Comedy series created by Michael Schur (who wrote for The Office (US) and co-created both Parks and Recreation and Brooklyn Nine-Nine), starring Kristen Bell and Ted Danson.

After being killed by an oncoming truck, Eleanor Shellstrop (Kristen Bell) wakes up in an unfamiliar and idyllic world. She is greeted by Michael (Ted Danson), the "architect" of this world, who tells her that as a reward for her exceptionally virtuous life, she will now spend eternity within "The Good Place" along with the rest of the best of the best of humanity.

There's only one problem: Eleanor is not a nice person at all. She has been confused with someone else.

Eleanor confides in her system-designated "perfect soulmate" Chidi Anagonye (William Jackson Harper), a neurotic ethics and moral philosophy professor, and emotionally blackmails him into teaching her to become a good person who deserves to stay in The Good Place; lest her rottenness be discovered, which would result in her being tortured for eternity in "The Bad Place".

Complicating matters are Eleanor and Chidi's next-door neighbors: humanitarian socialite Tahani Al-Jamil (Jameela Jamil) and her soulmate, the silent Buddhist monk Jianyu Li (Manny Jacinto). Finally, there's Janet (D'Arcy Carden), a humanoid resource interface containing all of the information in the universe designed to provide anything that the residents desire.

The show is also available on Netflix, and as such, is labeled as a Netflix Original in some countries. Episodes aired on NBC first, then on Netflix the following day. On June 7, 2019 it was announced that the fourth season

◊ would be the final one. A six-episode web series titled The Selection was released

as a bridge to the end of the third season and the beginning of the fourth season. The series ended on January 30, 2020 with a 75-minute Grand Finale.

Despite being a comedy, the show is highly serialized and each episode directly follows from the one before. Therefore, beware of spoilers that may be unmarked.

The Good Place provides examples of the following tropes:

open/close all folders
A to E
F to J
K to O
P to T
U to Z
"Holy motherforking shirt balls!"
Feedback

Example of:
Gosh Dang It to Heck!