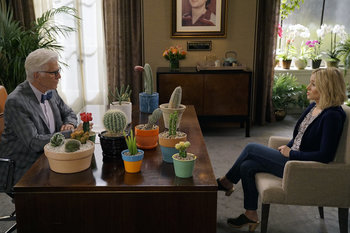 Michael interviews Eleanor, Chidi, Tahani, and Jason about Eleanor and Janet's death. After finally getting Eleanor's file from Janet (who is still re-learning things and had been only producing different types of cacti beforehand), he learns that Eleanor ruined a dress that belonged to her roommate Madison and lied about who was responsible, leading to a lawsuit that bankrupted an innocent dry cleaner owner, public humiliation of Madison, and Eleanor's personal profit via t-shirts insulting Madison. This leads to Michael calling the Bad Place to come pick up Eleanor. A train from the Bad Place arrives, bringing Trevor, a cruel and sleazy demon, to take Eleanor. After Chidi confesses that he killed Janet and that Eleanor is learning to be a better person, Michael and the others arrive at the train station to prevent Trevor from taking Eleanor. Trevor agrees to let the matter be discussed if he can continue to keep the other Eleanor Shellstrop, who was meant for the Good Place and is then led off the train.