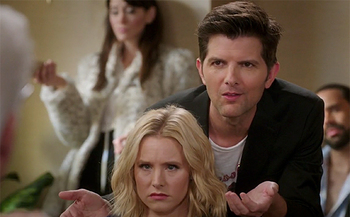 "You know, maybe I'm not as great as Real Eleanor, but I'm better than I used to be. I'm medium-good. Why haven't you forkers invented a medium place?"
"Can't believe you thought you could pretend to be Real Eleanor. She's like a perfect ball of light, and you're like a... wet pile of mulch. Someone made a person out of wet mulch and leaves and, like, dead slugs, and that's you."
— Trevor

As negotiations begin to determine the fates of the two Eleanors, Michael uses Tahani's house as a meeting place only for the Bad Place demons to turn the event into a party where they walk all over Michael, much to Tahani's dismay. Meanwhile, Chidi and the good Eleanor bond over dinner with Eleanor and Trevor. During the main negotiation session, Michael stands up to Trevor and his demons, declaring war on the Bad Place and promising to fight for Eleanor. Trevor promises to get Shawn, an "Eternal Judge", involved. Michael ultimately throws the demons out of the Good Place. That night, Jason finds Tahani in his "meditation room", demanding to know who he really is. In flashbacks, Eleanor is shown to dislike joining social groups.

Tahani questions the point of a Janet that does nothing but insult you is.

Tahani questions the point of a Janet that does nothing but insult you is.