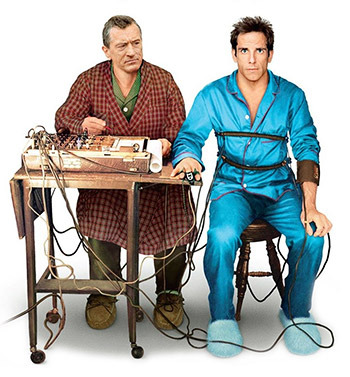 And you think your in-laws are embarrassing...
"Now, studies do show that polygraph tests are slightly better than, say, marshmallows at determining a person's truthfulness, but they are far from completely accurate."
—Cracked, "6 Myths About Psychology That Everyone (Wrongly) Believes"

The typical Hollywood Lie Detector is not like a polygraph. It is instead equipped with red/green lights or a loud buzzing/dinging to indicate truthfulness, which it decides accurately and instantly. The victim is usually betrayed by the machine to comic effect. The only way to beat it is through Exact Words, despite the fact intent to deceive should have the same physiological effect regardless of whether what you're saying is technically true or not.

While Perp Sweating an especially naive criminal, the cops may employ a fake lie detector, often a photocopier with an ominous paint job. The device really is a photocopier, secretly loaded with pages that have been preprinted with the words "TRUE" and "FALSE". The cops use the machine's answers (sometimes along with a warning that this is a new and experimental model of lie detector that could cause cancer or erectile dysfunction) to coerce the perp into a confession. (Note: some people claim this has happened in real life, but Snopes has its doubts.

A real life polygraph test typically works by asking you a mixture of embarrassing "control" questions in which everybody is expected to lie (for example "Have you ever lied to a loved one"), and relevant questions ("Did you do it"). If your physiological response on the relevant questions is the same or higher as on the control questions, you are deemed to be lying. Ironically, this means that being perfectly honest makes you more likely to fail the test.

In real life, there is little to no evidence that polygraphs perform better than chance. Interpretation of the results is highly subjective and usually biased by prior suspicions. And even if polygraphs did work, it is trivial to beat them using measures such as biting ones tongue or thinking exciting thoughts to increase responses on the control questions. Most polygraph operators know this; the polygraph is a distraction, and it's the operator who's really watching you.

For almost all cases, real life polygraphs are simply "Unreliable, Unscientific and Biased", according to the National Academy of Sciences, their findings not being admissible in court. After all, people can have their blood pressure through the roof, sweat buckets, generally being a nervous wreck and still tell the truth. Despite this, they are still given great weight by both the media and various governments.

Interesting note: The polygraph was invented by William Moulton Marston, who also created the character of Wonder Woman... who happens to wield a magic lasso that forces people to tell her the truth!

Compare with Living Lie Detector, when someone can discern falsehood as a superpower.