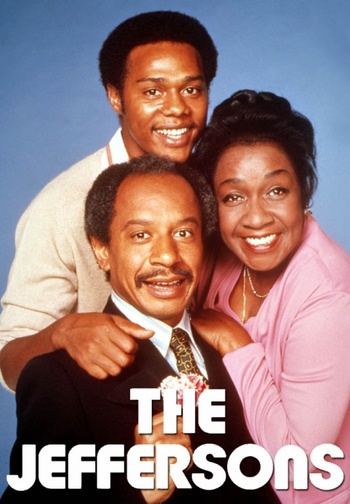 The longest-running TV series with a predominantly African American cast in the history of American television, The Jeffersons aired for eleven seasons (1975–85) on CBS. It features an upper-class black couple, George (Sherman Hemsley) and Louise (Isabel Sanford) Jefferson, and is a Spin-Off of All in the Family, in which the characters had been the neighbors of Archie and Edith Bunker.

Although created (like its parent show) by Norman Lear, it wasn't that political. Still, it was the first series to prominently feature a mixed-racial couple, Helen (Roxie Roker) and Tom (Franklin Cover) Willis.

The show had its own spin-off, titled Checking In and centering on the character of housekeeper Florence (Marla Gibbs). Low ratings led to its cancellation just four episodes, and Florence returned to The Jeffersons.

The show did not get a proper finale, as it was ended early due to Executive Meddling on the part of CBS. Most of the cast found out after the last episode, but Sherman Hemsley didn't know until he read about it in the newspaper.