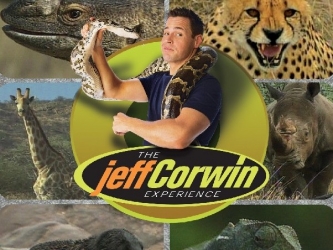 The Jeff Corwin Experience was an American television show that largely focused on tropical animals and started airing on the Animal Planet cable channel in 2001. It was hosted by actor and conservationist Jeff Corwin, who had previously appeared in Going Wild With Jeff Corwin on the Disney Channel.

In its initial season, the program included a cobra festival in India, jungles in Thailand, Borneo and the Galapagos Islands off the coast of Ecuador in South America. The following year, the program was greatly expanded and featured Guyana, Australia and Tanzania. In its third season in 2005, Mexico and Peru were included, as well as Kenya and Uganda in Africa. While the program included some North American settings, most of the segments featured the wildlife of other continents around world.

The program had a great deal educational value, but was also a great source of entertainment as well. In a similar vein to Steve Irwin, Jeff was frequently bitten or nearly bitten by the animals being described in the show, something that he always played for laughs or used to make numerous jokes and references to pop culture and movies.

Corwin was awarded an honorary doctorate degree in public education from Bridgewater State College for his contributions to science through the show. He has long been a proponent of rain forest preservation. Programs such as this and those of Steve Irwin and Terri Irwin (of The Crocodile Hunter) were amongst the first to reflect a "human coexistence with wildlife approach", which was in sharp conflict with poachers and past practices in many parts of the world.

Corwin and the show provide examples of the following: