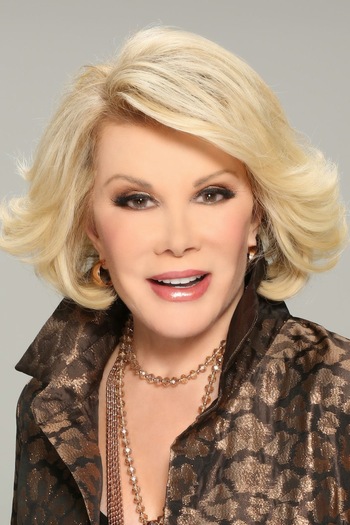 "Can we talk?"
Advertisement:

The late, great Joan Alexandra Molinsky (June 8, 1933 – September 4, 2014), known professionally as Joan Rivers, was an American stand-up comedian and TV personality, who revolutionized the world of comedy as we know it, being recognized by many of her peers as a trailblazer for women in comedy.

Born and raised in New York City, Rivers attended the prestigious Barnard College for women, where she earned degrees in English literature and anthropology. She began her comedy career in the late 1950s, performing at coffee houses, Borscht Belt resorts, and strip clubs (where she appeared in between strip shows). While her act was initially deemed too risqué for television, her big break came when Bill Cosby recommended her as a last minute fill-in for The Tonight Show Starring Johnny Carson. Her ten-minute routine killed, and she became a regular on the show, even earning "permanent guest-host" status in the '80s.

Soon after this, Joan received a phone call from executives at the then-new Fox network, who wanted to give her her own late night show. This came when Joan found out that she wasn't in the shortlist of celebrities to replace Carson as host of The Tonight Show despite her reputation in the series. In a fit of envy, Joan agreed to the executives' requests and The Late Show with Joan Rivers premiered in 1986. The move forever ruined Joan's relationship with Carson, who felt Joan had betrayed him and never spoke to her again. The show didn't achieve the ratings the executives expected, and this, plus the antics of her husband, producer/manager Edgar Rosenberg, culminated in Joan being fired from the show in 1987.

Joan's career and life would suffer greatly from this, as she was banned from The Tonight Show (a ban which would last until 2014, when Jimmy Fallon took over the show) and struggled to find decent work in Hollywood (with the only notable work at the time being the voice of Dot Matrix in Spaceballs). Her husband Edgar would then take his life after both of them were fired by Fox, something Joan blamed on the humiliation he felt after being fired.

In 1989, Joan took another shot at hosting a talk show, this time in daytime syndication. The Joan Rivers Show lasted until 1993 and even earned her a daytime Emmy Award. After its cancellation, she was hired by the E! network to cover the red-carpet show for the Golden Globe Awards and Academy Awards along with her daughter Melissa. Joan's dry wit, interest in fashion, and catchphrase "Who're you wearing?" made red-carpet coverage a new form of journalism, and both the show and red-carpet fashion became industries which have lasted until this day.

In the following years, Joan would participate in a series of TV shows, such as Big Brother, Celebrity Family Feud and Celebrity Apprentice (In which she would win first place) She would also start her own show on QVC promoting her jewelry line and a reality TV show called "Joan & Melissa: Joan Knows Best?" on WE TV.

In 2010, Joan returned to E! to host a fashion-focused show by the name of "Fashion Police" in which she judged people by the clothes they wear at different award shows. The show would turn out to be a massive success and quickly went from a half an hour show to an hour, with several specials. She would also start a Youtube podcast called "In Bed with Joan" in which she would interview different celebrities in a bed from her house.

Sadly, Joan passed away in September 2014, after a throat surgery gone wrong ended with her on life support, from which she was taken off a few days later. Her funeral was reported to have been filled with celebrities, a red carpet and laughter, as she had requested years before her death.

Joan's comedy style was brash, sometimes crude and highly satirical, which gained her many detractors during her 55 year long career. She was a highly polarizing figure, as her routines regularly included jokes about the Holocaust, 9/11, all ethnicities and many other controversial topics. Joan herself would never apologize for a joke, and she believed that life was too tough and laughter was needed to survive. Self-Deprecation + Take That! + Crosses the Line Twice= Joan Rivers.

In spite of all the hardships and controversies in her life, Joan will always be remembered as one of the best female comedians in the world, a trailblazer and an Icon.

Some of her work includes: