Pinball / The Lord of the Rings 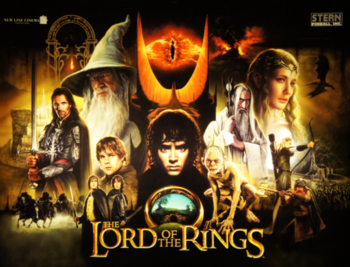 The Lord of the Rings is a 2003 pinball game designed by George Gomez, programmed by Keith Johnson, and released by Stern Pinball. Based on The Lord of the Rings film trilogy, it naturally encompasses all of the major characters and events of the epic. Assemble the Fellowship, fight the Balrog, knock down Barad-Dûr, and face the Eye of Sauron. Players who manage to endure all three multiball modes (one for each part of the trilogy) will be able to finally Destroy the Ring. But only the best warriors can ascend into Valinor...

Along with sound clips from the movies, Elijah Wood and John Rhys-Davies reprise their roles as Frodo and Gimli, respectively, to provide custom speech for this game.

The Lord of the Rings was re-released in December 2009 as The Lord of the Rings: Limited Edition, which includes a signed playfield, gold-plated and brass metalwork, a mirrored gold backglass, and software and hardware support for a shaker motor. Only 500 units of the limited edition were made.

Alternative Title(s): Lord Of The Rings