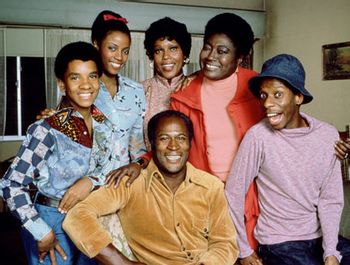 Good Times was a Norman Lear-produced Sitcom that ran on CBS from 1974–79. The show, a Spin-Off of Lear's earlier comedy Maude (itself spun off from All in the Family), followed the lives of the Evans family, a poor black family living in the high-rise projects of Chicago:

Most episodes featured the efforts of the Evans to get by in the ghetto and make a better life for themselves. Despite the fact that those efforts usually ended in bitter disappointment, the show remained surprisingly positive and uplifting. And like most Lear shows of the time, Good Times wasn't afraid to moralize or bring up controversial topics.

Both Esther Rolle and John Amos grew dissatisfied with J.J's character. Rolle felt that J.J. was not a good role model for blacks, and Amos felt the show was becoming more about his antics, than about its original intent to be about family values. The show's most controversial move was killing off patriarch James at the beginning of the fourth season. Esther Rolle hoped this would bring a shift in J.J.'s character from the clownish Kavorka Man he had been, to a more responsible Man Of The House. The writers didn't see it that way, seemingly ramping up J.J.'s foolishness (though it's worth noting that Jimmie Walker, who played J.J., was a stand-up comedian and not much of an actor). This led to Rolle quitting the show for the entire fifth season, her character having relocated to Arizona to be with her second husband. She was brought back in the sixth and final season with promises to clean up J.J.'s act (and never reference her second marriage, which Rolle thought went against Florida's character in multiple ways).

When the fifth season started, an 11-year old Janet Jackson joined the cast as Millicent "Penny" Gordon Woods; after Penny's abusive mother Lynnetta reveals that she was abused as a child after a fight with Thelma and Willona, Lynnetta tells Penny that she deserves better. In the sixth season, Lynnetta has remarried and starts sending Penny anonymous gifts while attempting to frame Willona as an unfit adoptive parent who throws wild parties with undesirable guests. After her scheme is exposed, she leaves and Penny regards Willona as her real mother.

The series finale aired on August 1, 1979, with a Mega-Happy Ending. Reruns can be seen daily on TV One, on Get TV (as of December 2017) and occasionally on Nick at Nite's TV Land. All six seasons are available on DVD.