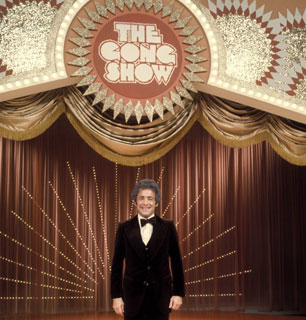 In 1976, Chuck Barris and NBC introduced The Gong Show. And it was good.

Nominally a Game Show and talent search, the show gave amateur performers of all types a chance to show off their stuff and had one basic rule: Don't Suck. Even that was too much to ask of some contestants. If any of the three celebrity judges found an act to be particularly awful, they could hit a large gong hanging behind them and force the act to leave the stage. The contestants all got a minimum of 45 seconds (originally 15, then 20, then 30) to perform no matter what; the judges would sometimes watch the clock, mallet in hand, waiting for the time to pass. Those who weren't gonged received a 0-10 score from each judge, with the highest total (out of a possible 30) receiving a trophy and a check for $516.32 ($712.05, then $716.32, on the concurrent nighttime version).

In truth, it was a parody of talent shows like Ted Mack's Amateur Hour, with its anarchic rules, wildly-varying quality level, and random-number prize check (which was supposedly the minimum daily pay that a member of the Screen Actors Guild could receive). But none of the acts seemed to notice.

Barris was simultaneously the best and worst host possible. He was the worst because he had no comfort in front of the camera. But, given the nature of the show, his hosting skills were often on par with the contestants' talent. Besides, he was little more than the framing device. You really watched to see the awful talent, the risqué content, or both. (One recurring sketch had "Rhett Butler" replacing the word "damn" in his most famous line with even worse language. Censored, of course. Naturally, xkcd references this at one point.

The risqué stuff was all intentional; in fact, Barris often threw in acts he knew would be cut in order to get the borderline stuff past the censors. Of course it backfired — one memorable sketch featured a pair of 17-year-old girls sucking on Popsicles with no accompaniment. Phyllis Diller gave it a 0, Jamie Farr gave it a 2, and Jaye P. Morgan not only gave it a 10 but physically prevented the other two from gonging it. Why? "That's how I got my start in show business!"

Almost as famous as the awful acts were the recurring characters. The most famous was the Unknown Comic (Murray Langston), who performed with a paper bag over his head. Others included the aforementioned Scarlett and Rhett, stagehand Eugene Patton (known as "Gene Gene the Dancing Machine", who was always treated as a surprise cameo by the end), and scriptwriter Larry Spencer, whom the audience was told to boo and hiss at as though he were Oil Can Harry.

The show lasted two years on NBC and a further two in syndication, but in that time became something of a cultural phenomenon, even showing up in other programs (including, most famously, an episode of The Carol Burnett Show). Given the popularity of the American Idol "losers" shows, perhaps it was ahead of its time. Meanwhile, Barris wrote a dubious autobiography called Confessions of a Dangerous Mind, whose title should tell you all you need to know about him. The book, in which Barris claimed to have been a CIA agent, was adapted into a movie with Sam Rockwell starring as Barris.

Surprisingly (or perhaps not), a number of performers who would later have considerable success made their TV premieres on The Gong Show, including an early incarnation of the band Oingo Boingo and future Bozo the Clown Joey D'Auria.

The show has had several revivals, mostly in ten-year intervals. The first was in 1988 with Don Bleu as host, a version which lasted for only one season. Game Show Network revived it as Extreme Gong in 1998 with George Gray at the helm, and kept it going for two seasons. The next revival was in 2008 on Comedy Central, also lasting for only a season with Dave Attell as host. Since 2012, a Sony-approved live stage version

has been running in the New York City area. In 2017, right on schedule, ABC revived the show

with Will Arnett at the helm, following in the footsteps of ABC's multiple summer game shows (Celebrity Family Feud, To Tell the Truth, Match Game, and fellow Sony property The $100,000 Pyramid). This particular revival was hosted by British TV personality Tommy Maitland; if that name doesn't ring a bell to anyone on either side of the Pond, it's probably because he's a fictional character played by

Mike Myers (who also served as executive producer in season two). Unlike other remakes, the 2017 version adopted a lot of the motifs of the original version; a second season aired in 2018 before being given the gong itself by ABC.