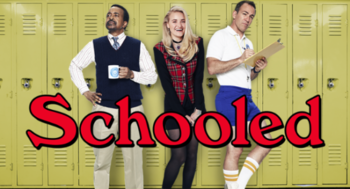 Schooled is a 2019 television series spin-off of the ABC period sitcom, The Goldbergs. The series began as an episode of The Goldbergs, "The Goldbergs: 1990 Something", before being picked up for the 2019 season. The series was created by Adam F. Goldberg and Marc Firek and is set in 1990-something Jenkintown following the life of Lainey Lewis as she begins her career as a teacher at William Penn Academy. In addition to A. J. Michalka reprising her role, Tim Meadows and Bryan Callen return in their roles as Andre Glascott (now school principal) and Coach Mellor. The series so far has been well received, with a 70% rating on Rotten Tomatoes.

On May 21, 2020, co-creator Adam F. Goldberg announced on his Twitter account that Schooled was cancelled and would not be renewed for a third season, a victim of the COVID-19 Pandemic.

No relation with the 2007 Gordon Korman novel.