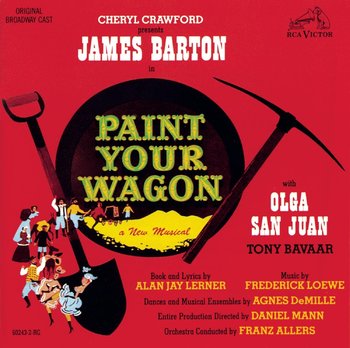 A musical play by Lerner and Loewe, set during the California Gold Rush.

The time is May, 1853, and the place is "thirty miles from nowhere" in the California hills. While digging a grave for a fallen friend, Ben Rumson strikes gold. Soon hundreds of men pour into the new mining town from all parts of the country and several other countries. Much tension among the miners is caused by Rumson's almost nonexistent female population, consisting only of Ben's sixteen-year-old daughter, Jennifer. Jennifer starts doing the laundry of a three-quarters Mexican miner named Julio, who like her can't read or write. Ben intends to send her East on the first coach from San Francisco to give her the sort of education her late mother had. Another miner, Jake, strikes the mother lode he needs to realize his ambition of opening a dance hall. A Mormon arrives with two wives and a baby, and Ben forces him to put one wife, Elizabeth, up for auction. Ben and Elizabeth get quite drunk on their wedding day. The coach comes in carrying a whole troupe of Chorus Girls; it leaves with Jennifer, who bids a heartfelt farewell to Julio. By the time Jennifer returns from school, late next year, the gold has started to run out and Julio is among the miners who have moved on. News comes of a strike forty miles south, and most of the dying town's remaining population hitches up their wagons. Ben sells off his wife but refuses to abandon his town, and Jennifer stays with him waiting for Julio, who passes through town the following spring.

Paint Your Wagon was first produced in 1951, with the same producer, choreographer, scenic designer and orchestrator as Lerner and Loewe's previous hit Brigadoon, but it was not as successful. Eighteen years later, Paint Your Wagon was adapted into a feature film with less dancing, more Clint Eastwood, and a largely different plot.