Series / Show Me a Hero 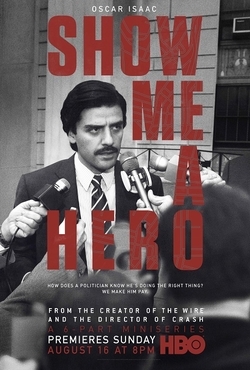 Judge Leonard B. Sand: Justice is not about popularity.
Mayor Nick Wasicsko: No, it's not. But politics is.

Show Me a Hero is a 2015 miniseries, based on the book of the same name by Lisa Belkin, dramatizing the Yonkers housing controversy of the 1980s and early 1990s. It was written by The Wire co-creator David Simon and writer/journalist William F. Zorzi. All episodes were directed by Paul Haggis. It aired on HBO.

The plot begins when New York judge Leonard B. Sand (Bob Balaban) orders that new public housing units be built in predominantly white neighborhoods in the largely segregated city of Yonkers, New York. Many white, middle-class citizens are outraged, fearing that the lower-class and predominantly black and Hispanic tenants of the housing will turn their communities into slums.

Nick Wasicsko (Oscar Isaac), an ambitious city councilman, uses the controversy to get himself elected as the youngest mayor of a major American city. However, he quickly discovers that the courts will bankrupt Yonkers if he continues to fight the housing. To save the city, he's forced to champion the very housing that he ran against, all at the expense of his budding political career.

The political side of the plot is contrasted with the lives of several Yonkers families from both sides of the tracks, whose lives are affected by the new housing in different ways.