Series / Servant of the People 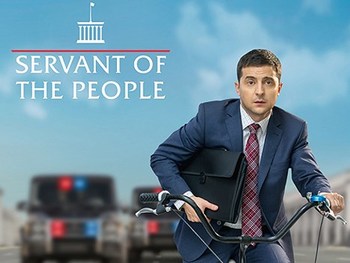 Servant of the People (Слуга народа in Russian, Слуга народу in Ukrainian, also often translated as The Servant of the Nation) is a 2015 Ukrainian sitcom about a simple history teacher who becomes the president of Ukraine.

The events transpire in a near future. The next presidential elections are nearing. Vasiliy Goloborodko (Volodymyr Zelenskyy), a high school history teacher, loses his temper in front of a co-worker and goes into a profanity-laced tirade, chewing out the Ukrainian government. Unbeknownst to him, one of his pupils films him and puts the video on YouTube. The video becomes a hit, and, while it lands Vasiliy in trouble at his school, his pupils and their parents agree with him to the point of suggesting he should present himself as a candidate for presidency and organizing him a crowdfunding campaign so that he could register. To his own surprise, he wins.

The idealistic Vasiliy finds himself in a cynical world he is absolutely unsuited for, but is ready and willing to tackle.

The series was produced by the studio Kvartal 95 and premiered in November 2015. After airing daily, the first season ended in December, and got a very positive reception. Over the season, the series evolved from a sitcom featuring just Vasiliy in a Fish out of Water-type situation (and his family as comic reliefs) to a Work Com with an Ensemble Cast.

A real-life political party entitled "Servant of the People" was officially registered in Ukraine by Kvartal 95 on 31 March 2018, with Zelenskyy as a member of the party. Having no prior political experience apart from playing a politician on television, Zelenskyy ran in the 2019 Ukrainian presidential election and was elected President of Ukraine by a landslide on 21 April 2019, in a surprising case of Life Imitates Art.

In addition to running on television, the series was also released on YouTube. You can view it here

in Russian and Ukrainian, with some episodes subtitled in English (the subtitles are in the process of being written). It can also be streamed on Netflix.