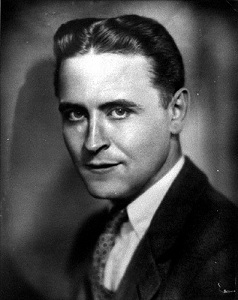 Francis Scott Key Fitzgerald (September 24, 1896 – December 21, 1940) was an American author who is well known as the chronicler (and namer) of the Jazz Age. Throughout his career he wrote five novels and many short stories.

Fitzgerald was born in Minnesota. He liked to drink and party and wrote his novels in order to support that lifestyle for his wife. The materialistic and hedonistic tendencies of his peers are reflected in his works, as is plenty of angst about the appropriateness of all that partying after WWI. While courting his future wife, Zelda, he completed his first novel This Side of Paradise. The works that followed were a river of short stories, The Beautiful and Damned, Tender Is the Night, The Love of the Last Tycoon, and his most famous work, The Great Gatsby.

The critical and commercial popularity of Fitzgerald's work faded during his lifetime, and he finished his career as a script doctor in Hollywood. His critical reputation was revived following his death, with The Great Gatsby emerging as a strong contender for the Great American Novel.

He has been portrayed by:

Works by F. Scott Fitzgerald with their own trope pages include:

Other works by F. Scott Fitzgerald provide examples of: