Series / Z: The Beginning of Everything 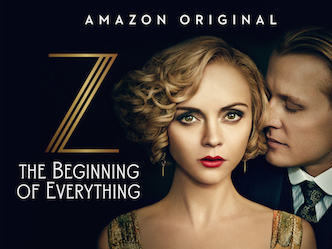 "I love her and she is the beginning of everything."
Advertisement:

Z: The Beginning of Everything is a 2017 period drama series. It is headlined by Christina Ricci, who also acted as an Executive Producer. It is based on a book of the same name by Therese Anne Fowler.

The series begins in Montgomery, Alabama in 1918. World War I is waging and a young debutante named Zelda Sayre is eager to find her place in the world. She's a constant source of frustration to her parents, as she has little care for the conservative sense of propriety in the south. She loves to go to dances unchaperoned, wear shorter dresses, flirt shamelessly with young boys and dream of a better life in somewhere like New York.

Zelda soon meets a like-minded young man serving in the War (David Hoflin). He charms her with his Purple Prose and love of art - in stark contrast to the men of Montgomery, who only care about money and motorcars. The man's name is F. Scott Fitzgerald and he dreams of writing the Great American Novel. Zelda promises to marry him when he publishes his first book. He succeeds after the war is over - but only after he's borrowed some passages from her letters.

The series was broadcast on Prime Video and, despite a second season being announced, ran for a single season.