Literature / Tender Is the Night 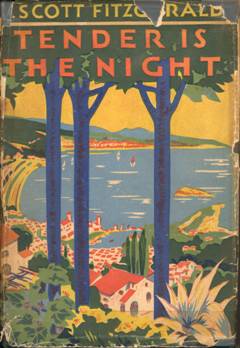 Her naïveté responded whole-heartedly to the expensive simplicity of the Divers, unaware of its complexity and its lack of innocence, unaware that it was a selection of quality rather than quantity from the run of the world's bazaar; and that the simplicity of behaviour also, the nursery-like peace and good will, the emphasis on the simpler virtues, was part of a desperate bargain with the gods and had been attained through struggles she could not have guessed at.
Advertisement:

Tender Is The Night is one of F. Scott Fitzgerald's most famous novels and by some accounts, including the author's own, his greatest. Published in 1934, it tells the story of a couple of wealthy, glamorous American expatriates living in France in the 1920s, Dick and Nicole Diver. At first sight they are the very image of success and connubial harmony, but all isn't what it seems. Dick is in fact a psychoanalyst and Nicole is a former patient of his, a young woman who after her mother's death had a sexual relationship with her father and who suffers from recurring bouts of trauma-induced schizophrenia.

Dick develops a drinking problem and, even as his wife recovers, his own life begins to fall apart. Nicole eventually leaves him for her lover, an assertively macho younger man, while Dick vainly tries to start over.

The novel's story arc actually mirrors Fitzgerald's own life as he was writing it, from the height of success and self-confidence to existential breakdown. It is also infused with a sense of postlapsarian wistfulness, as the hero feels that he is living in a world in which his values are no longer relevant.