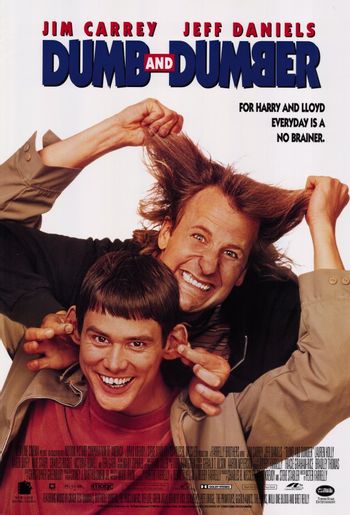 For these guys, every day is a no-brainer.
Harry: Hey, Lloyd.
Lloyd: Hey, Harry.
Harry: So, how was your day?
Lloyd: Not bad. Fell off the jet way again.
Advertisement:

Dumb and Dumber is a 1994 comedy film starring Jim Carrey and Jeff Daniels, directed by the Farrelly Brothers (though Bobby Farrelly was uncredited). Lloyd Christmas (Carrey) is a friendly, though somewhat sadistic and more than somewhat dimwitted, limo driver who lives with his Heterosexual Life Partner, Harry Dunne (Daniels), a friendly, less sadistic than Lloyd, though still dimwitted dog groomer, in their Rhode Island apartment.

Lloyd's life is turned around when he falls in Love at First Sight with Mary Swanson (Lauren Holly), a rich female client headed for Aspen, Colorado, who leaves her briefcase at the airport. After trying unsuccessfully to return the briefcase to Mary at the airport, Lloyd talks Harry into going on a road trip to Colorado to return the briefcase. Thus, they hit the road in Harry's dog-shaped dog grooming van, unaware of what the briefcase is actually full of: ransom money, which means that Lloyd and Harry are being trailed by two hitmen, along with anybody else they piss off along the way.

Gained a short-lived animated series in 1995 and a Prequel in 2003, Dumb and Dumberer: When Harry Met Lloyd, which details the meeting between the two during their high school years.

In 2012, it was announced a sequel would be filmed with Jim Carrey and Jeff Daniels returning along with the original directors, but the project stalled multiple times and was passed up by Warner Bros. (who owns New Line Cinema, who produced the original) in June 2013. The next week, however, Universal picked up the project, Dumb and Dumber To, which was released 20 years after the original in 2014. Please list tropes for the sequel in that page.