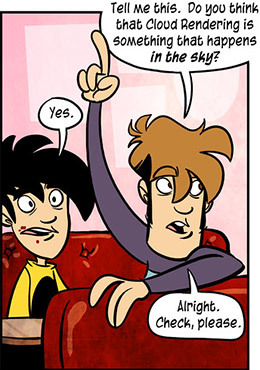 Brian: Check please!
Steve: We already paid!
Brian: I know. It's what you say after restaurant weirdness.
— The Sarah Silverman Program
Advertisement:

The usual punchline uttered at the end of any sustained mayhem in a bar or a restaurant. Usually delivered by whatever major character either instigated or was caught up in the melee. When not, it is instead delivered by an otherwise nondescript background character who has made it through the entire disaster completely unscathed. Also heard when a guy gets lucky in a bar, just before he heads out to consummate his newfound luck.

Usually restricted to comedies and those dramas which are not afraid of the occasional lighter touch. Compare/contrast the subtler Was Just Leaving.