Film / After the Sunset 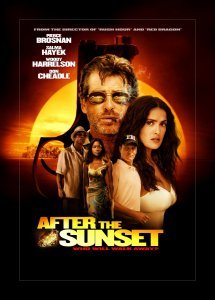 You've seen it a million times ever since studios started showing The Bad Guy Wins; the Tropical Epilogue of The Caper. Gentleman Thief Max Burdett (Pierce Brosnan) and his Classy Cat-Burglar paramour Lola Cirillo (Salma Hayek) retire to an island paradise after succeeding at their One Last Job, and Inspector Javert Stanley P. Lloyd (Woody Harrelson) is left fuming back on the mainland, rotting in paperwork hell. The camera pans out on them laying on folding chairs on a beach, sipping those colorful nondescript alcoholic drinks with little umbrellas as the waves crash and the sun sets.

Lola is more than ready to settle down. However, Max — though never once faltering in his love for her — finds himself in Thrill Seeker withdrawal... just as Stanley tracks them both down, knowing that it will take a bit more than the beaches, the money and the girl for Max to give up crime. He knows the pair made their fortune stealing two of the three world-famous Napoleon Diamonds, and whaddya know, the third is on tour on a luxury liner that will be docked nearby for the next few days. So begins a new game of cat-and-mouse. Directed by Brett Ratner and shot on-location in The Bahamas, this is what happens... After The Sunset.