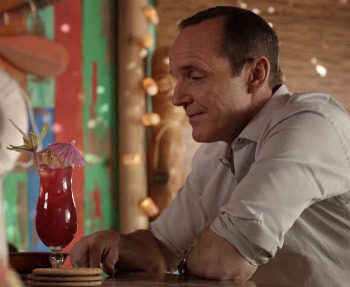 A bright pink (or blue, or orange...) cocktail, garnished with big pieces of fruit (or lots of small ones on a skewer) and decorated with the all-important paper cocktail umbrella, possibly served in a coconut shell, a hollowed-out pineapple, a fancy curved glass or a tiki glass. This cocktail is associated with beaches and Pacific islands, especially Hula and Luaus vacations. A tiki-themed tourist trap is not complete without a row of colorful rum-based cocktails, which are identifiable more by their decorations than by their contents, a visual shorthand for the type of drink one usually doesn't get at the local pub.

In Real Life, Fluffy the Terrible will sometimes apply; despite their widespread derision as "girly drinks" they are often extremely potent, their smooth fruity taste concealing several ounces of rum. It also adds a bit more street cred when you know that many of these are the descendants of elaborate mixes popularized in speakeasies during the USA's Prohibition Era to mask the horrible flavor of poorly made and stored bootleg liquor. That being said, a good number of these cocktails are post-Prohibition, and even post-World War II, arising out of the tiki craze that arose after thousands of American servicemen came home from the Pacific Theater. The umbrellas here covered boozy, elaborate, and well-balanced combinations of various forms of rum with multiple fruit juices and weird syrups that represented a real peak in the craft of bartending (much like the classic cocktails of the period 1865-1914 and the modern classic cocktails of the 2000s through today), the kitsch aesthetic aside.

An umbrella cocktail will be the regular order of a Cloudcuckoolander.