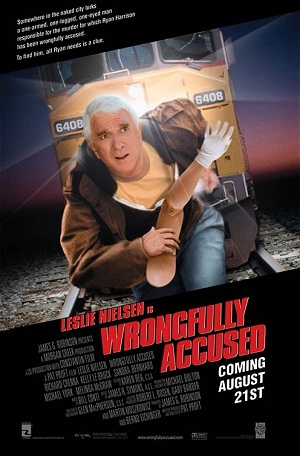 "It's not just a movie...it's every movie."
Advertisement:

Wrongfully Accused is a 1998 parody film written and directed by longtime ZAZ collaborator Pat Proft and starring Leslie Nielsen. A rather brilliant example of the joke-a-minute (though really it's more like every 10 to 20 seconds) school of comedy.

The frame parody is built around the 1993 version of The Fugitive centering on renowned concert violinist, Ryan Harrison (Nielsen) in pursuit of the one-armed, one-legged and one-eyed man who killed his lover's husband (Michael York) after being framed for the murder. Richard Crenna's delightful parody of Tommy Lee Jones' fast-talking federal marshal is probably the highlight of the movie, with many of the best lines.

However, The Fugitive is hardly the only thing that gets parodied here. Particularly notable targets include Mission Impossible, Titanic, Braveheart, Riverdance, Clear and Present Danger, Patriot Games, Mentos commercials, Baywatch, Star Wars, Fatal Attraction, The Usual Suspects and even North By Northwest and Casablanca, among many others.