Literature / The World According to Garp 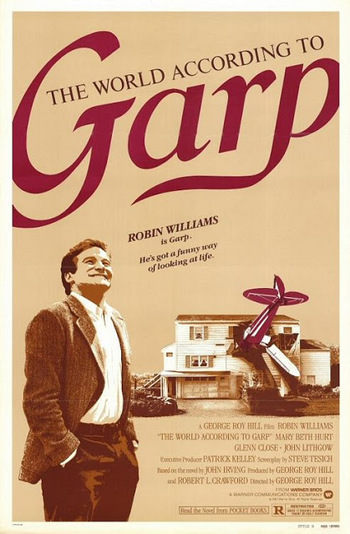 "In the world according to Garp, we are all terminal cases."
Advertisement:

John Irving’s fourth novel, published in 1978, The World According to Garp was a bestseller for several years. The book was also a finalist for the National Book Awards for Fiction in 1979 and its first paperback edition won the Award the following year. Written in the style of a biography, it chronicles the quirky life and times of author, husband, and father T.S. Garp from his unusual conception to his tragic early death.

A film version directed by George Roy Hill, who wrote the screenplay adaptation along with Steve Tesich, was released in 1982. It stars Robin Williams as Garp, along with Mary Beth Hurt, Glenn Close, John Lithgow, Hume Cronyn, and Jessica Tandy.

Alternative Title(s): The World According To Garp