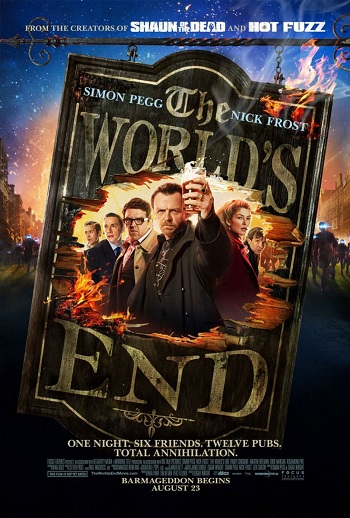 The World's End is a British-American science-fiction comedy released in the summer of 2013, directed by Edgar Wright and written by him and Simon Pegg, who stars in the film, with Nick Frost, Paddy Considine, Martin Freeman, Eddie Marsan and Rosamund Pike in supporting roles.

Gary King (Pegg) is a Manchild who decides to reunite his old gang of friends — Andy Knightley (Frost), Steven Prince (Considine), Oliver Chamberlain (Freeman), and Peter Page (Marsan) — after losing touch 20 years ago. They've all got perfectly normal lives now, whereas Gary is still walking around in the same awful clothes, wearing the same pitch-black sunglasses and spouting the same old nonsense. Recalling the "Golden Mile" pub crawl they failed in their teens, Gary convinces them to return to their childhood village of Newton Haven, determined to finally do a complete run.

Things start out slow with the crawl, with everyone tired by Gary's antics right from the get-go. The guys make an effort to catch up with each other, enjoy the evening and get a bit of Character Development in while they're at it, but their hearts just aren't in it. And then, just as they're about to call it a day, something seems... off about the pubs.

Really off. Really, really off.

Cue things escalating, and the group soon has to wrestle with decidedly more than they bargained for, in addition to Gary's unwavering determination to finish the Golden Mile.

This is the final installment of the Three Flavours Cornetto Trilogy, preceded by Shaun of the Dead and Hot Fuzz.

and the full trailer here

Not to be confused with This Is the End, another 2013 comedy about The End of the World as We Know It. Also unrelated to the third Pirates of the Caribbean movie At World's End, or the Flash video game World's End.